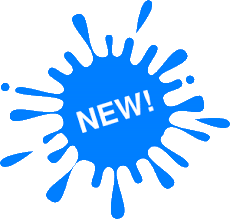 
More to come...
The Train Simulator features are still coming to be explained here (like a german version of this...sorry). So far check out the video-tutorials on YouTube for this.
There is another tab called "Act As Folder" which is yet not working. It is intendet to let your Midi-event act like opening/closing a folder that contains different actions on Midi-events which are already assigned to actions. This would let you i.e. assign more different events to a limited ammount of existing keypads (like a small Midi-pad has).
An additional type of action could be a complex chain of mouse- and keyboard commands. You could call it a "macro" that could be fired by a Midi-event.
If these ideas will appear in future-release of MidiKey2Key depends on your feedback.
Tell me, what you would like to see as a new feature.


You can edit or delete existing actions:

You can edit test actions without using Your Midi-device:

Working with multiple settings
If MidiKey2Key is startet without parameters a default "settings.ini" is loaded and used to store Your changes.
You can save additional setting-files by using the "Save As..." - command from the the File-menu. All Your settings can be stored in the "My Documents\MidiKey2Key"-folder but do not have to. Any path is allowed.
To create a new setting, just use the "New" entry from the "File"-menu and give Your settings file a path and a name.
When no special setting-file is loaded the title-bar of the programm just shows "MIDIKey2Key vX.X.X.X and nothing else. If a different setting-file is loaded, it shows the name of the setting in addition:

All changes that You do, are stored in this file. Therefore use "Save As..." to have the new setting-name in the title-bar and then add or change your actions.
A different setting-file can be loaded by using "Load Custom..." from the File-menu or start MidiKey2Key.exe with a path and setting-file-name. For example: "Path-To-Program\Midikey2Key.exe" "c:\Users\Ben\Documents\MidiKey2Key\NewGamingSetting.ini"

So it is possible to create a simple shell-script (.bat or .cmd) that starts MidiKey2Key with a special setting. To start automatically other programs, use the built-in STARTUP action.

For a lot more easy creation of a shortcut to MidiKey2Key, that starts with a certain setting, You can use the "Save Shortcut..."-command from the File-menu.
Just choose a new name of Your choice ("MidiKey2Key - " is the default, You can add a settings-name freely, or change it completely to antyhing), choose a directory (Your desktop is the first choice of the program) and click "Save". 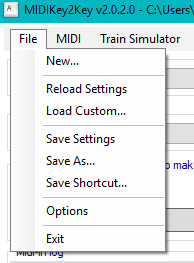 There are some more additional features:

VB-Script-SDK for advanced programming
To let a single Midi-Pad trigger a program and the next time, You press it again to trigger another program or stop the first one, there is a VB-script example in the download-section.
Normally MidiKeyKey can only perform one program-action on one Midi-Key and another on a 2nd Midi-Key. In the given example everytime the same single script is executed.
It remembers it´s last state. The example can be used to play a sound-file in the background via VLC and stops VLC when executed again. This saves Midi-Pads and can be used to trigger a bunch of different sound-files, since the script takes the path/name of the soundfile to be played as an argument.

Possibly coming features
Thinking about this...

My game/app is not responding on key-actions, but OBS does
Keep in mind, that "normal" programs are responding only, when they are in foreground.
Some programs - like OBS - are capable of responding on global hotkeys. Wether they are in focus or not. This affects not the most apps!
Specially games do read the keyboard in a different way than most of desktop apps do. If Your game/app has another way of reading key-presses, MidiKey2Key's keypresses are not recognized so far. There is another way of sending keystrokes to be fully implemented into MidiKey2Key, but this means a lot of work and would possibly fix all of these problems.
Wait for future updates...
In the meantime You can perform keyboard-events by using the little helper-app SendKey, which can address the app You send keypresses to or wait for this app`s start first.
You can trigger it with a program-start-action plus arguments.
Check it out at the download-page under "other tools/files"

When another MIDI-program is running, MidiKey2Key crashes with the error-message 'There is not enough memory available'
This is not related to Your system's memory. It is a misleaded windows error message. It occurs because window's MIDI driver is not multi-device-capable. You can use other MIDI software besides MidiKey2Key sharing the same MIDI-input by using a virtual MIDI-port:
Download Tobias Erichsen's loopMIDI here, install and run it.
You can add one or more virtual MIDI loop ports which appear as inputs and outputs in every Windows MIDI application. Choose a virtual loop-port as output-device in MidiKey2Key and activate 'Mirror MIDI' in the MidiKey2Key options. In Your other MIDI-App choose the loopMIDI port as input. You can use multiple instances of MidiKey2Key.

Can I control volume-settings of OBS with MidiKey2Key?
Unfortunately OBS does not have hotkeys for volume-control so far. So MidiKey2Key cannot help. :(

Some special Keys can not be triggered
This is true. The API, MidiKey2Key uses to send keystrokes is limited to common key(-combinations), that Windows is able to use as hotkeys. No alternating keys, like Shift, Alt or Control alone can perfom an action and other special keys.
Luckily the multimedia-keys (that some PC-keyboards have) work!

There is a problem with "Wait for NoteOff" in my game/app
...that causes, the hotkey is only send once, but does not repeat, (it looks like).
Actually when using Notepad for testing a held MIDIkey, a letter will not be repeated. Using MidiKey2Key for controlling games like pinball, You should see, that the triggers should be held until You release the MIDI-key.
From version 2.3.5.0 this should work with devices, which send a velocity of 0 instead of NoteOff messages.
See also "My game/app is not responding on key-actions, but...". Specially games are very different in reading keyboard-input. So far MidiKey2Key acts as a standard Windows-app.
It is possible that there are games or apps that do not respond to MidiKey2Key's Keyboard-actions. Sorry so far.